← We Are All Corporate Professors Now (and what to do about it): Summer Reading Mashup
The Power of Two: Leveraging Academic Senates and Faculty Unions →

Highlights: Campaign for the Future of Higher Education, 3rd National Meeting (May 18-20, 2012) 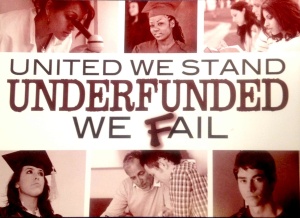 Demand for college is at an all-­‐time high and student debt has reached a devastating one trillion dollars. Despite this, Congress is debating whether to cut student aid.

This kind of cut would further close off college access, particularly for lower income students and students of color, the growth demographic of traditional age students.

Proposals to reduce eligibility and the size of Pell Grants and to increase interest rates on student loans, if adapted, would be a tragic and short-­‐sighted slamming of the door on our nation’s future.

We need a strong Pell Grant program that does not reduce either eligibility or the size of the grant. We also need the lowest possible interest rates on federally subsidized student loans.

This is not the time to curtail the prospects for students to attend colleges and universities.

We need a national discussion about how ensure that higher education is affordable, available and accessible to everyone who can benefit from it.

The third national meeting of the Campaign for the Future of Higher Education (CFHE) was held under beautiful blue skies in Ypsilanti, Michigan, May 18-20, 2012 (1).   More than 60 faculty and professional staff, including members of the Coalition of Graduate Employee Unions, participated in a grassroots assessment of the challenges facing public higher education.

The event began with short reports on challenges and successes.   A noteworthy success since the last CFHE  (Boston: December 2011) was a formal meeting with U.S Under Secretary of Education Martha Kanter.  The CFHE contingent was able to correct some misinformation, such as the belief that increasing costs in public higher education are due to high faculty salaries rather than dramatically higher administrative costs and expensive building projects that are unrelated to direct instructional needs. Other topics  included problems facing the contingent faculty workforce. Over the past 40 years, institutions have shifted away from tenured faculty to 70% of the workforce being underpaid, contingent or “adjunct faculty with no health and other benefits” (2).    CFHE will schedule a follow-up meeting with the U.S. Department of Education to continue this discussion.

In an age of shock-doctrine capitalism, many states—Pennsylavania, New Jersey, and California, for example—are still experiencing dramatic budget cuts to public higher education, while other states like New York have revenue streams that have stabilized.  New York’s CUNY now has other restructuring challenges, however, with the imposition of mandated Pathways.  The upper midwestern region—Michigan, Ohio, Wisconsin—is facing an onslaught of antiunion legislation promoted by ALEC and funded by the Koch brothers.

Over 80 pieces of antiunion legislation have been introduced in Michigan, attempting to change it to a “right-to-work” state. One plan attempts to divide the state by a patchwork of “right-to-work zones” that would be locally implemented in more conservative areas of the state. In response, Michigan-AAUP has organized the Protect Our Jobs campaign, which includes advocating for a state constitutional amendment to protect collective bargaining rights. It succeeded in gathering enough signatures to put an initiative on the November ballot. Ohio faculty unions are working on a similar initiative.  The Association of Pennsylvania State Colleges and University Faculties (APSCUF) is facing another 20% state reduction to higher education in Pennsylvania.  In response they initiated the United we Stand, Underfunded we Fail campaign in March 2012.   APSCUF is confronting both Governor Corbett’s higher education task force, which narrowly focuses on “technical experience, distance learning and job training”  and the specter of right-to-work legislation.

Also discussed over the weekend were the poor working conditions of contingent faculty who face at-whim employment and poverty level wages.  The New Faculty Majority (NFM) has contributed to a recent publication on these issues: Embracing Non-Tenure Track Faculty: Changing Campuses for the New Faculty Majority.  As part of its coalition building campaign, NFM convened a national summit in Washington, DC on January 28, 2012: Reclaiming Academic Democracy: Facing the Consequences of Contingent Employment in Higher Education.”  This summit focused on improving communications among stakeholders, identifying broad-based reform goals along with strategies for their implementation.

The reduction in state spending for public education is still a common trend across states.  As Rudy Fichtenbaum and Howard Bunsis stressed in their presentation on university budgets—“Taking on the administration’s ‘We’re broke’ argument”—a state’s fiscal crisis is being used by many institutions as an excuse to restructure. Restructuring is imposed irrespective of the hefty unrestricted reserves which institution’s refuse to allocate to instructional support.  This restructuring conforms to the current trend to vocationalize and standardize pubic higher education while weakening faculty governance.  To track our institution’s actual financial health, we need to examine its audited financial statements.

Several ideas for funding public higher education were brought forth for discussion with the understanding that states alone cannot solve the public higher education funding problem.   A menu of solutions could be used across states depending on their specific situation.  Some funding ideas at the federal level were a “pay it forward” plan that includes doubling the size of PELL grants while increasing the scope of eligibility and providing maintenance of effort provisions at the state level; other ideas involved various taxes including a financial speculation tax.

CFHE’s Virtual Think Tank was established to introduce a faculty voice in the national discussion of higher education policies, currently dominated by executives, consultants, and philanthropic foundations.  Gary Rhoades provided an update on CFHE’s first two policy reports.   “Closing the Door, Increasing the Gap: Who’s not going to (community) college?” (April 2012) analyzes recent problematic enrollment and policy trends at the nation’s community colleges. As caps on community college enrollment are expanding, the scope of educational programs is narrowing; as quality is undermined, access is denied to large numbers of lower-income students and students of color.  The second policy report, forthcoming shortly, “Who is professor staff and how can s/he teach so many classes?” is based on New Faculty Majority research regarding contingent faculty working conditions and their affect on student learning. Just-in-time hiring practices do not allow any faculty adequate time to develop a course.  Also, the demographics of contingent faculty models complex racial inequities.

Influence of Aps in Ed